If you get some new watercolours for Christmas, it's only right, proper and polite to try them out. This was a dinky little set of lovely Sennelier colours - the "Aqua-mini" -  that came as part of a gift subscription to The Artist magazine.

Posted by Amanda Bates at 10:54 No comments: 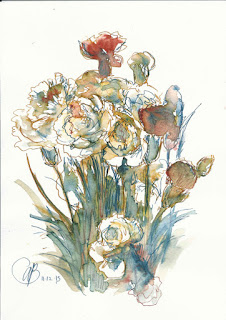 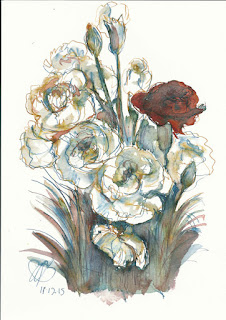 Carnations last for an awfully long time. I bought these at the beinning of the week for an acrylics commission (due to be given as a gift, so I haven't posted it yet), and have painted them a few more times in acrylic as well. But today I decided to try something different...

I used calligraphy inks with a dip pen (mainly for the convenience of changing colours readily). I have three bottles of ink: sepia, indigo, and Indian Red.With a generous helping of water on a size 22 round brush, these are what resulted.
Posted by Amanda Bates at 11:18 No comments: 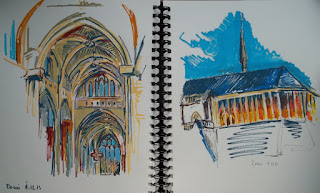 This is Douai Abbey near Beenham in West Berkshire: the interior and exterior of the Abbey Church, drawn in Molotow markers
Posted by Amanda Bates at 08:54 No comments:

We found these delightful carvings on the side of St. Peter's Church in Woolhampton today: a green man and his lady apparently surrounded by vine leaves. I used a 2B pencil to draw them. Time was moving on and it was getting cold, so I left the lady's leaves unfinished.

See also The Woolhampton Green People on my main art blog.
Posted by Amanda Bates at 08:35 No comments: 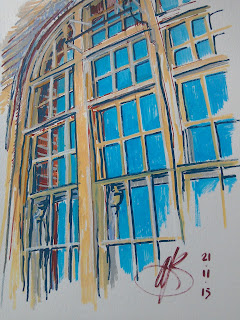 It's a lovely space, the gallery at Proteus Creation Space. There's a huge great window at one end, and they've got lights on rails and stuff.. 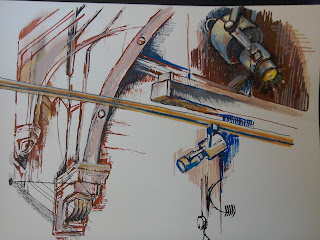 The Basingstoke Project has 5 more days to run. Details, including times here: 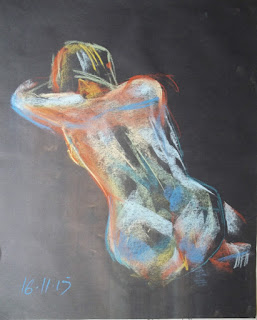 It's been a while since I attended a life class, but I did go to one last night. This, one of several large sketches made during the two hours of the class, is my favourite drawing. It was done quickly in Conté using the "landscape" set of colours. Far more satisfying than the "portrait" set.

Posted by Amanda Bates at 14:42 No comments: 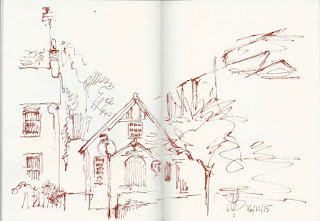 Yesterday, I had occasion to be loitering in the Proteus Creation Space car park. Our - Artikinesis' - exhibition was within the Creation Space. Making more pictures of Basingstoke was, of course, completely pointless.

So I did it anyway.

I had had my eye on the Spiritualist Church building for a while. A low, corrugated shack, directly opposite the grandeur of All Saints (not pictured), it looks like a relic from a not-too-distant past.

Posted by Amanda Bates at 14:16 No comments:

One of the advantages of sketching your young walking companions as you walk is that you don't inevitably walk past them. And they do tend to repeat movements...

Posted by Amanda Bates at 14:54 No comments:

This is the start of a new, personal, sketchbook project. I have a smallish panoramic sketchbook containing khadi paper, and it's dedicated to documenting the Wayfarer's Walk.

The Wayfarer's Walk is a long distance path running from one end of Hampshire to another. It joins the Test Way at Walbury Hill, just short of Combe Gibbet. The Gibbet is technically on the Test Way, but let's not worry about that, nor which county it's in. It's a landmark, and it makes a good subject for a sketch...

The paper's a bit wrinkly because, on the other side, there's a line and wash (Uniball and Inktense) of the view from Combe Gibbet, looking south.

That's definitely Hampshire.
Posted by Amanda Bates at 12:03 No comments: 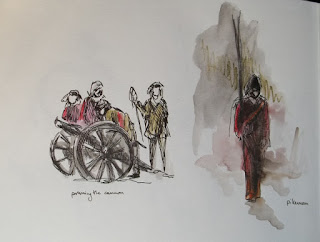 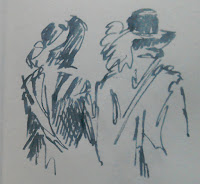 When I visited Basing House as part of Artikinesis on Wednesday, I discovered that this weekend was Civil War weekend at the property. I was busy yesterday, but today we went as a family.

These are a few of my sketches.

Posted by Amanda Bates at 11:10 No comments:


This place has a bad past, and an imminent new future - Rose and I caught it on the cusp when we visited it last weekend. We were told that the builders are moving in this week. The building is to be boarded up again; the debris and overgrowth is the be cleared; extensions and outbuildings are to be demolished; and the property is to be redeveloped.

There has been a lot of interest in Crookham Manor. It was a boys' boarding school, closed down in the early 1980s after horrendous revelations of child abuse. Part of the property was converted into bedsits, but much of it remained untouched. A few years ago, a set of stunning photographs of the eerie abandoned school made a stir, on the Internet and in the UK press. The place became a minor, unofficial, tourist attraction. While most visitors came to look, some were more destructive. Thieves stole the lead from the roof, leaving precarious stacks of roofing tiles and gaping holes through which the rain came. The water in the fabric of the building has made the upper storey unsafe. Vandals destroyed much of what was left.

My drawings don't show the graffiti, the litter or the broken glass that crunched underfoot. But I did attempt to show some of the damage - the bare laths in the ceiling of the chapel, the shattered stone font, the silenced organ...

And the complete removal of the balusters from the grand staircase.

Posted by Amanda Bates at 16:08 No comments:

A journey by train 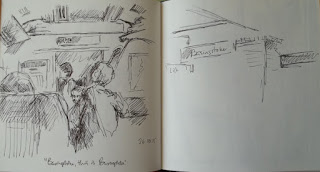 I went to London by train on Wednesday. I started to draw the inside of the carriage. When we were approaching Basingstoke, I added the departing passengers.

This left a commuter working on his laptop. We didn't seem to stop long at the next station, Woking; the sketch incudes impressions from the train on both the outward and return journeys. The refreshment trolley came down the train and, after it had gone, I noticed the battered upholstery on one of the seats in front of me.

On the way home from London, I arrived at Waterloo with time to spare... 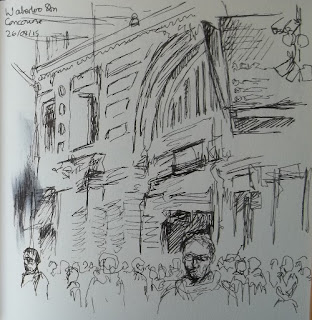 On the return journey, I drew a couple of fellow passengers.

Posted by Amanda Bates at 00:19 No comments: 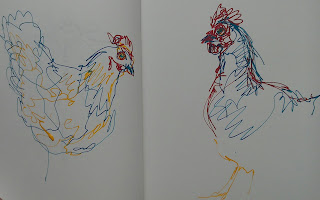 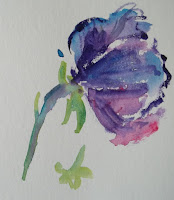 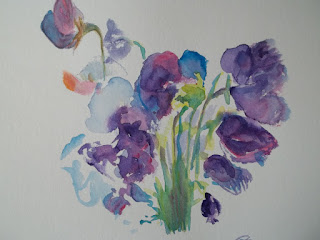 The sweet peas did come from my mother's garden, but they were in a vase when I painted them.
Left: watercolour; Right: watercolour with graphitint pencil in the additional image to the top left.

The poppies and lilies stayed in the garden:

Posted by Amanda Bates at 14:44 No comments:

From up on the downs

A selection of quick sketches made yesterday on a short walk aong the Wayfarer's Walk over Cannon Heath Down and Watership Down.

Posted by Amanda Bates at 15:31 No comments:

Walk and Draw in Kingsclere 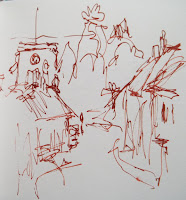 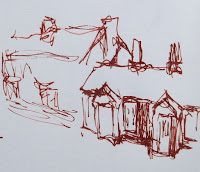 Two little sketches from earlier this month. It's been a busy few weeks, so I didn't stop to draw ... I just drew. Both sketches made with a Derwent Graphik Line Painter pen
.

Left: Looking down George Street towards the church, with the downs rising behind the tower. A variant on a view that I tend to call "the heart of the village".
Right: The Village Club and Brown's Bungalows on George Street.

Posted by Amanda Bates at 15:27 No comments:

This was my first Urban Sketching event. Rose and I tagged along with the London Urban Sketchers on their day trip to Oxford, invited by the organiser, Isabel, who is Newbury-based.

It was a wonderful way to spend a sunny day in Oxford - a town whose beauties are many, and which was jam-packed with tourists, graduating students and sundry other folk. There were quite a lot of sketchers among them...

We all met up three times: at the start, at lunchtime, and at the end, when we laid our sketches down on the floor of the town hall for the whole group to see. The rest of the time, we were roving sketchers...

Click here to see the full set of my sketches on Flickr
Posted by Amanda Bates at 15:01 No comments:

Portsmouth: All Along the Waterfront

Actually, we didn't cover anything like the whole waterfront (just the bit between Gunwharf Quays and Southsea), but the conflation of those two song titles (Bob Dylan via Jimi Hendrix, "All Along the Watchtower"  and Simple Minds, "Waterfront") has got stuck in my mind.

Yesterday, Rose and I were in Portsmouth again. The "Great Waterfront City" has a lot of very interesting things to see and, indeed. sketch.

Naturally, we gravitated to the waterfront itself and made our way up to Southsea, where we stopped to sketch the pier. Somehow, the slightly neglected-looking end of the edifice was the most intriguing part...

Posted by Amanda Bates at 22:11 No comments:

From a car park in Basingstoke...

Posted by Amanda Bates at 14:43 No comments:

Graphitint and Rollerball - Trees through a Window 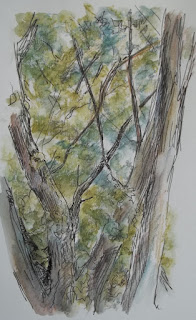 I had my graphitint pencils with me, but no brush (or water). I wanted to draw the effect of the light coming through the trees outside the window. Dry tinted graphite wasn't going to give me that effect.

But if I put the colour for the leaves in and the darker colours for the branches, I would probably loose the clarity of the wetted green shades when the branch colour bled into the leaf colour... What I needed was a waterproof dark. I lighted upon a black rollerball pen. Having firmly delineated the wood, I felt confident enough to give its bark some colour.


At home, I used a waterbrush to wet the graphitint colours. The effect is pleasingly subtle.
Posted by Amanda Bates at 12:52 No comments: 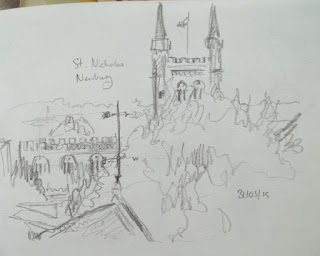 Urban panoramas are a bit tricky. You've got to get all the roofs to line up and be the right size, and sometimes you run out of paper on the right hand side.. (especially if you are right handed).

But Newbury has a wonderful skyline. Some fascinating roofs: ancient, modern and inbetween.

I was standing on the top floor of a multistorey car park, awaiting my family's return from an extra bit of shopping, so I knew I didn't have long. Having run out of paper before including the church, it was a relief to find that I had time to do a separate drawing, and a bonus to be able to add the pen clarifications below the first drawing, which was made in 6B graphite stick.

Posted by Amanda Bates at 11:40 No comments:


Two of the most interesting buildings in Thatcham, sketched quickly in sepia calligraphy ink, black rollerball and with, in the case of the Bluecoats sketch, a Derwent Drawing pencil sky added later.
Posted by Amanda Bates at 08:56 No comments: