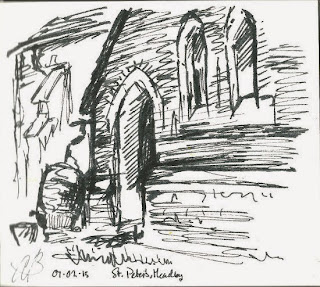 St Peter's is a pretty little church, surrounded by dense woodland o two sides, that I drive past fairly often. I've stopped to sketch it once before - albeit with less than satisfactory results. But that was a few years ago, and I think I may have got better at quick sketching.

I had to be quite quick - it was cold out there!

As well as the three sketches of the church, I also turned to the woods and a fabulous yew within the churchyard with stonework leaing up against it, and ivy-covered crosses... perhaps some people like their churchyards neat and tidy, but I do rather like to see evidence of nature and the passage of time.

Although I'm not laying claim to any churchyards, of course.

All sketches done using the Japanese calligraphy pen, with graphite added to the churchyard.