The next book was unexpected. No, it really was The Unexpected: Sue Crook's theme, for which she had been given, uexpectedly, an old Private Eye annual.

I went straight to the popular culture for my inspiration, starting with Roald Dahl's Tales of The Unexpected (a 1970s TV programme that was surely far too scary for me to have watched as a child, yet nonetheless, watch it I did, with my parents).


And on to a local theme. When I first walked on Greenham Common, I knew its history as an RAF and, later, an American Air Force base. The old control tower was obvious, as were the remnants of the runways (and the cruise missile bunkers), but I was still surprised to find this in a corner of the common: 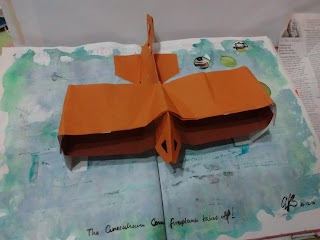 I've always been fascinated by the rusty fire plane, destined never to leave the ground. I wanted to make it fly... this is the first pop-up I have ever made. It is a clumsy flier, but that might be expected of a monument.

Also on Greenham Common, I was initially surprised to come across a yellow fire hydrant:

And finally, noone expects ... 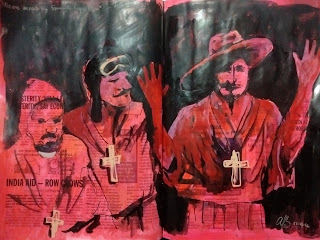