Love is Gail Davis' book. It was once a mass market paperback edition of "Out of Africa". I found myself reading bits of it; I must get a pristine copy sometime.

These photographs show only some of the changes that I made to the volume. After the constraints of Classical Mechanics, Love, with its hundreds of pages that accepted most media (sometimes very enthusiastically - some inks soaked through multiple pages, but that was done on purpose) was wonderfully freeing. As, indeed, it should be, given the subject.

I discovered the delights of working in a sort of series, where the meaning accumulated from one page to the next. I made at least three of these series in the book. One was a map, a sort of book-within-the-book, with inked-on covers and collaged pages: 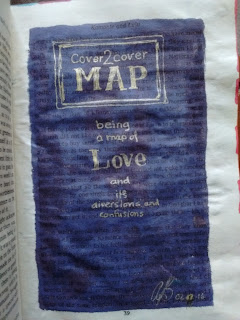 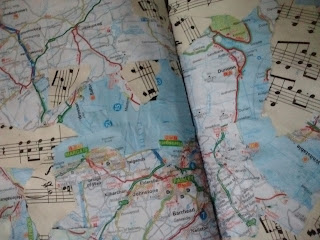 Another was a series of deliberate(ish) ink blots, soaking through the pages and attempting to describe certain characteristics of love. The image below shows the first page of this sequence and a cherub, who serendiptiously came to mind when I found the words "heavenly archer" on the page. 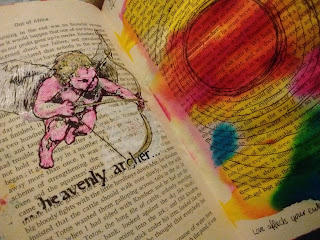 A third series was darker and less colourful and involved torn holes and burnt edges but it has a sort of happy ending. I didn't photograph that one. It was mostly words - my large, pseudo type over the top of the omnipresent text of the novel.

There were some dragons, tied together in a sort of love-knot: 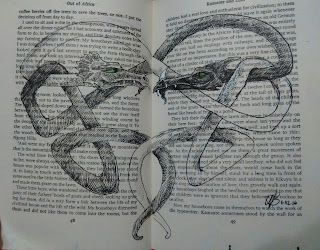 I did a pair of heads that I don't really like, but they are there: 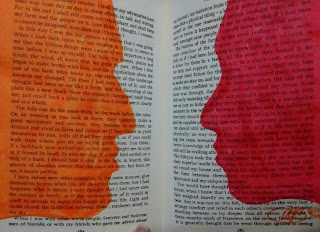 There was a song drawing, deliberately chosen not to be about romantic love but about the calmer, mutual, lasting love that can exist between friends: 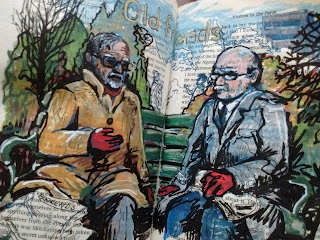 Do you recognise the song?

And there was a romantic cliché, drawn in carbon but imagined as a wooodcut illustration of two characters who are, arguably, the most famous lovers in English literature: 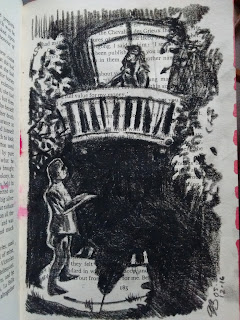